This is a revolutionary research result: mankind has achieved the first technological breakthrough in the de novo synthesis of CO2 to starch. No farming, no hydroponic chambers, just CO2 and hydrogen reacting with each other.

According to introducing, this manual way of starch synthesis rate is 8.5 times that of corn starch synthesis rate to the design of nature to achieve a major step forward, to create a new function of the biological system provides a new scientific basis, will also from carbon dioxide synthesis of starch has opened up a new path for the future, make possible future industrialization biological manufacturing starch.

Starch is a polymeric carbohydrate composed of many glucose units connected by glycosidic bonds. It is the main component of human diet and an important energy source. It is widely found in potato, wheat, corn, rice, cassava and other staple foods.

It is also a widely used industrial raw material, used in papermaking, clothing, plastics and other fields. At present, people mainly produce starch by fixing carbon dioxide through photosynthesis of corn, wheat, sweet potato and other crops. In plants, this process involves about 60 biochemical steps, complex physiological regulation, and theoretically an overall energy conversion efficiency of about 2%.

To overcome the major challenges facing humanity, such as the food crisis, the loss of arable land and climate change, we need to develop strategies for the sustainable supply of starch and the use of carbon dioxide, and devise new ways to convert carbon dioxide into starch other than through plant photosynthesis. This is an important task of scientific and technological innovation and will become a major disruptive technology in today's world.

Recently, Tianjin Institute of Industrial Biotechnology, Chinese Academy of Sciences has made a major breakthrough in the artificial synthesis of starch, and achieved the de novo synthesis of starch from carbon dioxide in a laboratory for the first time in the world. The results have just been published in science, a leading international journal.

Specifically, researchers at the Tianjin Institute of Industrial Biology and the Dalian Institute of Chemical Physics of the Chinese Academy of Sciences have designed an artificial route to produce starch from carbon dioxide and hydrogen produced by electrolysis. This route involves only 11 core biochemical reactions, and the starch synthesis rate is 8.5 times that of corn starch.

"It also means that the starch we need could be made in the future from carbon dioxide in a process similar to brewing beer on the factory floor." Tianjin Institute of Industrial biology director Ma Yanhe said. In simple terms, the process of this method is as follows: first, carbon dioxide is reduced to methanol with inorganic catalyst, then methanol is converted to three carbon, which is converted to six carbon, and finally polymerized to starch. 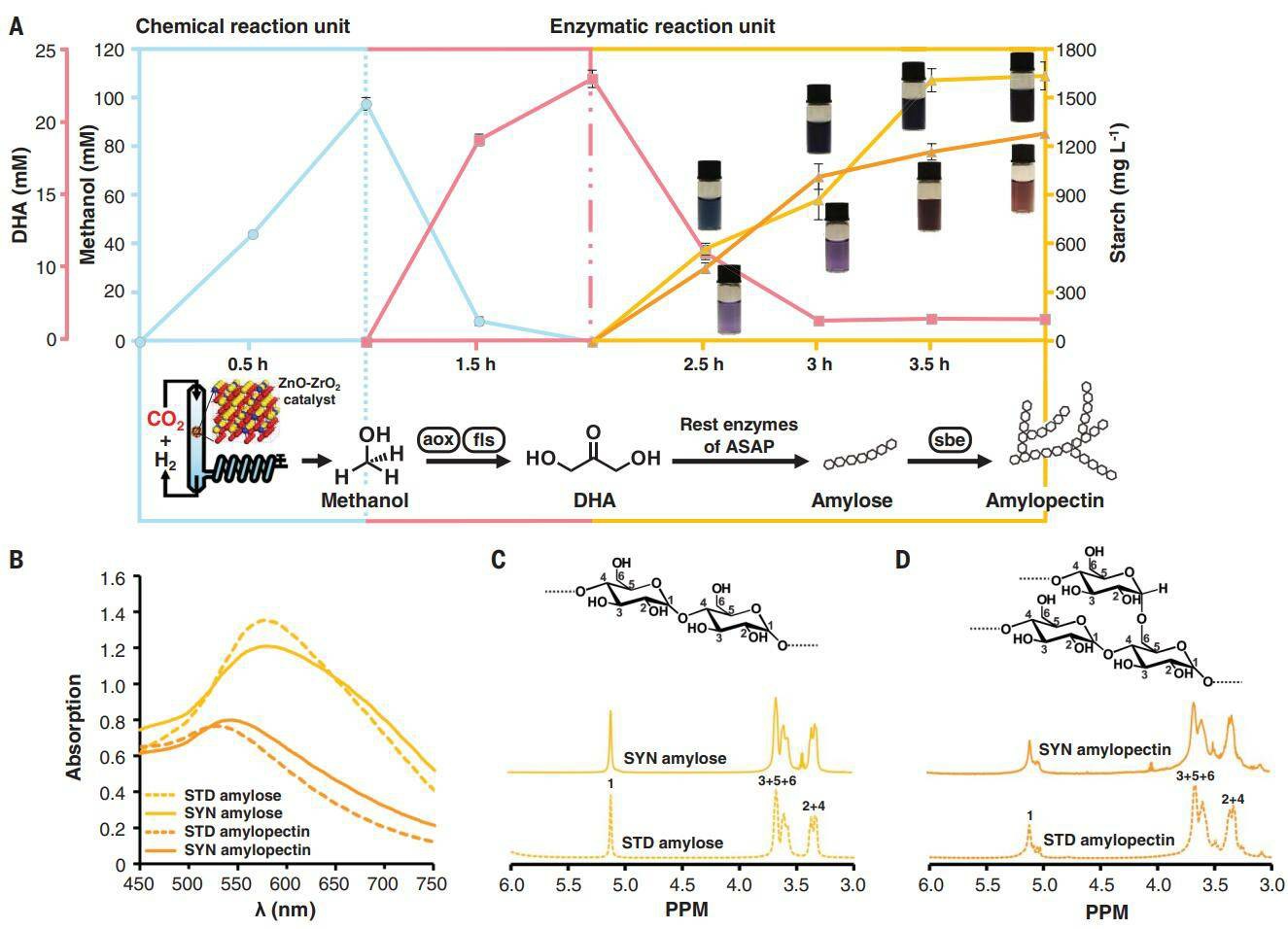 In general, this study has three major highlights:

The energy conversion efficiency was increased by 3.5 times, breaking through the limitation of using solar energy in natural photosynthetic carbon sequestration system. In order to design a synthetic pathway for carbon-based starch that exceeds natural capabilities, researchers proposed a scheme combining chemistry and biocatalyzation to construct an artificial pathway for carbon-based starch synthesis with only 11 main steps from about 7,000 biochemical reactions, increasing the theoretical energy conversion efficiency by 3.5 times. It makes it possible to fix carbon dioxide and synthesize starch efficiently.

From more than 60 steps to 11 steps, break through the complex regulatory barriers of starch synthesis in nature. In the artificial pathway of computational design, biological enzyme catalyst is the key to successfully construct this pathway. The research team excavated suitable biological enzyme catalysts from 31 different species, such as animals, plants and microorganisms, and constructed an artificial starch synthesis pathway with only 11 steps, which significantly reduced the complexity of the synthesis compared with more than 60 steps required for natural starch synthesis.

The limitation of low temporal and spatial efficiency of natural starch synthesis was broken through. Due to the lack of hundreds of millions of years of evolution of the natural pathway, the artificial pathway is difficult to adapt between biological enzyme catalysts from different species. To solve this problem, the research team developed a modular assembly optimization and spatial-temporal separation reaction strategy, which solved the problem of inhibition of substrate competing products in the artificial pathway, and finally obtained an artificial pathway that significantly increased the rate and efficiency of starch synthesis. 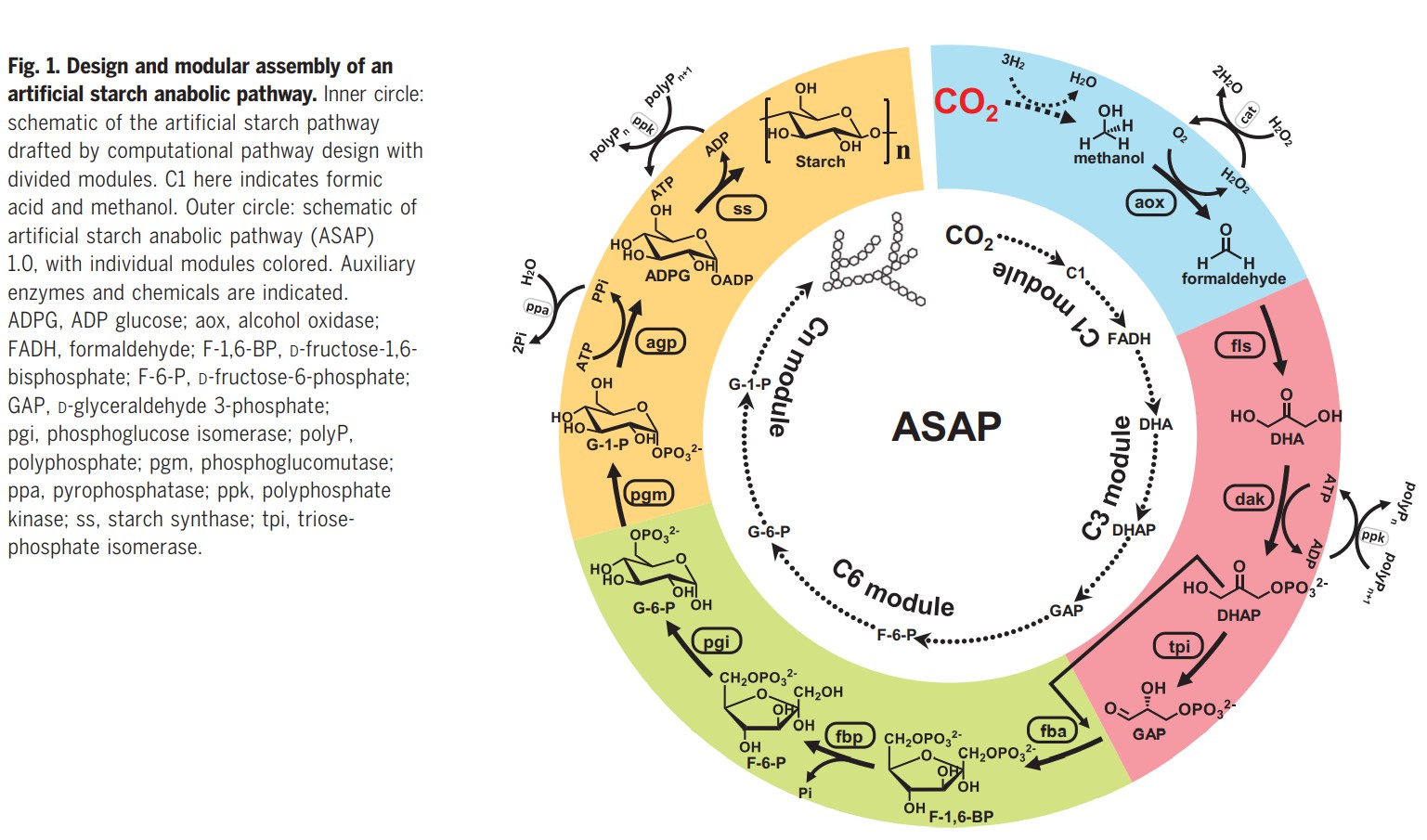 Converting carbon dioxide directly and efficiently into starch by synthetic means means we have taken a big step beyond natural agriculture. The new research provides the scientific basis for the creation of biological systems with unprecedented functions.

"According to the current technical parameters, under the condition of sufficient energy supply, the annual yield of starch in a 1 cubic meter bioreactor is equivalent to the average annual yield of corn starch in 5 mu of land, providing a possibility for the workshop production of starch to replace agricultural planting. If the cost of this system process can be reduced to an economically viable level in the future, it is possible to save more than 90 percent of arable land and freshwater resources and avoid environmental impacts such as pesticides and fertilizers." Paper a tao CAI said.

"If the overall cost of the process can be reduced to a level that is economically comparable to agricultural cultivation in the future, it is expected to save more than 90 percent of arable land and fresh water resources," said Ma Yanhe, corresponding author of the study.

This research has aroused people's attention and discussion in academic circles.

Zhou Qi, vice president of the Chinese Academy of Sciences and academician of the Chinese Academy of Sciences, said that the conversion and utilization of carbon dioxide and the synthesis of grain starch industry are one of the major scientific and technological issues to deal with global challenges. Tianjin industrial biotechnology research institute of Chinese Academy of Sciences scientific research organization model and cooperation innovation research team to conduct joint research, according to the engineering principle, using biological computing technology, design build unnatural reduction of carbon dioxide fixation and starch synthesis new path, in the lab on the international for the first time from a total synthesis from carbon dioxide to starch, the starch in the production of traditional agricultural planting patterns, A shift to industrial workshop production is possible.

According to Megan Phelan, executive director of science news, the latest paper discusses an entirely new way of synthesizing starch, a common plant carbohydrate. The synthesis process involves the use of carbon dioxide and hydrogen, and the research results will provide a new technological route for the production of starch, a globally important substance, through industrial bio-manufacturing in the future.

Chen Jian, an academician of the Chinese Academy of Engineering and former president of Jiangnan University, said the research has completely overturned the traditional way of starch production by combining chemical and biological methods, mainly using a series of new technologies such as protein engineering and synthetic biology. The work of Yan Ma and his team is a typical original achievement from "0 to 1", which not only has a revolutionary impact on future agricultural production, especially food production, but also has a milestone significance for the development of global bio-manufacturing industry. "Synthetic starch from carbon dioxide is an amazing example of using synthetic biology to solve some of the greatest challenges facing society today."

American academy of engineering, Sweden, mustang, says jens nelson, a professor at the university of technology professor yan-he ma and his team used recombinant enzyme system composed of different kinds of enzymes, the carbon dioxide is converted into starch chemical catalytic methanol produced successfully, it is a modern catalysis chemistry and synthetic biology with the combination of ideas, "This breakthrough will pave the way for more relevant research to be integrated and applied to help solve the major challenges we face in the future."

Vice President and professor at kobe university, Japan, the physical and chemical research institute of sustainable resources, deputy director of the center for science in the kondo, professor zhao, said professor yan-he ma and his team made significant breakthrough in the field of carbon dioxide into synthesis of starch were remarkable achievements of the study "does not rely on photosynthesis from the carbon dioxide to the synthesis of starch is our long-term pursuit of dreams, We can use synthetic starch to produce a wide variety of materials and foods, so this research will have a huge impact on the next generation of biomanufacturing and agricultural development." "It is well known that the fixation and conversion of carbon dioxide into useful organic chemicals is a major international challenge." 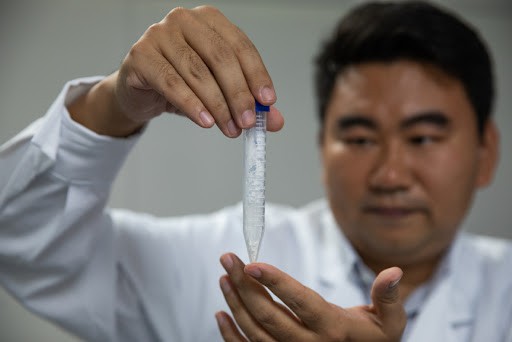 Tao CAI, the first author of the study, is an associate researcher at tianjin Institute of Industrial Biotechnology, Chinese Academy of Sciences.

Introduction to the research Team

Tao CAI is an associate researcher at Tianjin Institute of Industrial Biotechnology, Chinese Academy of Sciences. His research focuses on the regulation mechanism and application of LysR family transcriptional regulatory proteins. He received his PhD from Nanjing Agricultural University in 2009 and went to the University of Pennsylvania School of Medicine in the United States before working at tianjin Institute of Industrial Biology in 2012.

In this paper, corresponding author yan-he ma is tianjin industrial biotechnology, Chinese Academy of Sciences, director of the institute, the main research understanding and utilization of extremophiles, including extreme environment microflora in ecology and biodiversity, extremophiles physiological mechanism and function diversity, extremophiles special function and product development and utilization. He received his PhD degree from Jiangnan University in 2005 and has been the director of Tianjin Institute of Industrial Biotechnology since 2018. He has won the Second prize of The National Scientific and Technological Invention Award and the Invention Award of the Chinese Academy of Sciences. 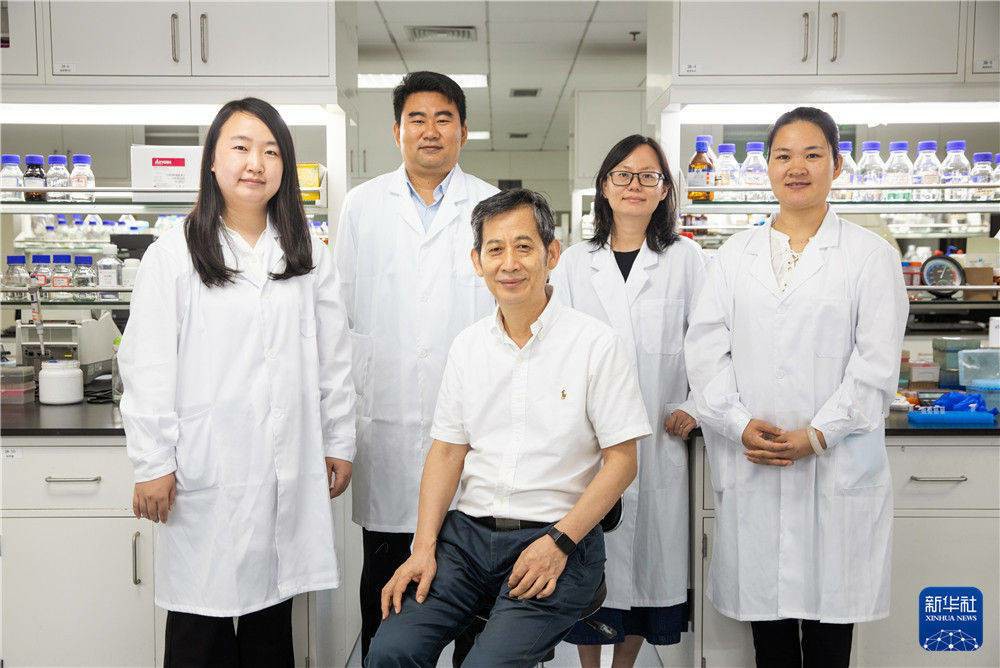 Alizee Gas, as a Chinese supplier of CO2 cartridges ,Congratulations on the success of the technology of synthetic starch from carbon dioxide